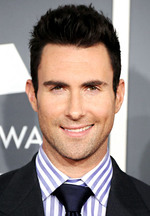 Adam Noah Levine (born March 18, 1979) is an American singer-songwriter, musician and actor, best known as the front man and guitarist for the pop-rock band, Maroon 5. Levine is one of the contestant judges and coach mentors on the singing TV show, The Voice. The winner of the first season, Javier Colon, was on Levine's team. Levine also returned as a coach for season 2 of The Voice. His team consisted of Mathai, Pip, Tony Lucca, Katrina Parker, Karla Davis, and Kim Yarbrough. Levine will appear as Leo, a recurring character, in American Horror Story: Asylum, the second season of the anthology series. He was elected TV's Most Crushworthy Male Reality Host/Judge in a poll held by Zap2it. He also returned for season 3 of The Voice. In June 2012, Levine was cast in the film Can a Song Save Your Life?.

Cheryl Stephanie Burke (born May 3, 1984) is a professional dancer. She is best known for being the first two-time champion of ABC's American version of Dancing with the Stars. Burke won her first championship with 98 Degrees member Drew Lachey in the second season. She won her second championship with retired football star Emmitt Smith in the third season. Burke had a guest role on the Disney Channel series The Suite Life of Zack and Cody, in the episode "Loosely Ballroom" along with fellow Dancing professionals Louis van Amstel, Ashly DelGrosso, and Lacey Schwimmer. She portrays Shannon, a nurse attending to the ensemble cast during a dance contest at the series setting, The Tipton Hotel. In the final round of the competition, Burke's character volunteers to replace an ill competitor. She and her partner go on to win the competition. 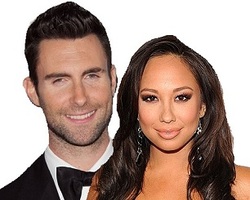