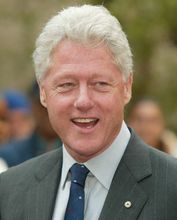 William Jefferson Blythe III (born August 19, 1946) is an American politician who served as the 42nd President of the United States from 1993 to 2001. Inaugurated at age 46, he was the third-youngest president. He took office at the end of the Cold War, and was the first president of the baby boomer generation. Clinton has been described as a New Democrat. Some of his policies, such as the North American Free Trade Agreement and welfare reform, have been attributed to a centrist Third Way philosophy of governance, while on other issues his stance was left-of-center. Born and raised in Arkansas, Clinton became both a student leader and a skilled musician. He is an alumnus of Georgetown University where he was Phi Beta Kappa and earned a Rhodes Scholarship to attend the University of Oxford. He is married to Hillary Rodham Clinton, who has served as the United States Secretary of State since 2009 and was the Senator from New York from 2001 to 2009. Both Clintons received law degrees from Yale Law School, where they met and began dating. As Governor of Arkansas, Clinton overhauled the state's education system, and served as Chair of the National Governors Association. Clinton unseated incumbent President George H. W. Bush in 1992 despite Bush's previously high approval ratings. As President, Clinton presided over the longest period of peacetime economic expansion in American history. The Congressional Budget Office reported a budget surplus between the years 1998 and 2000, the last three years of Clinton's presidency. He implemented Don't ask, don't tell, a controversial intermediate step to full gay military integration. After a failed health care reform attempt, Republicans won control of the House of Representatives in 1994, for the first time in forty years. Two years later, the re-elected Clinton became the first member of the Democratic Party since Franklin D. Roosevelt to win a second full term as president. He successfully passed SCHIP, providing health coverage for millions of children. Later, he was impeached for perjury and obstruction of justice in a scandal involving a White House intern, but was acquitted by the U.S. Senate and served his complete term of office. Clinton left office with the highest end-of-office approval rating of any U.S. president since World War II. Since then, he has been involved in public speaking and humanitarian work. Based on his philanthropic worldview, Clinton created the William J. Clinton Foundation to promote and address international causes such as prevention of AIDS and global warming. In 2004, he released his autobiography My Life, and was involved in his wife's and then Barack Obama's campaigns for president in 2008. In 2009, he was named United Nations Special Envoy to Haiti, and after the 2010 earthquake he teamed with George W. Bush to form the Clinton Bush Haiti Fund. 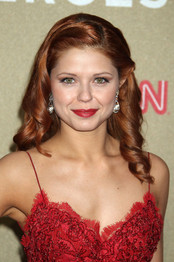 Anna Trebunskaya (born December 28, 1980) is a Russian professional ballroom and Latin dancer, known for her appearances on Dancing with the Stars (in the 2010 season she was partnered with Evan Lysacek). She now lives in Los Angeles, California and dances in the International Latin style. 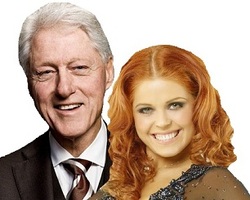