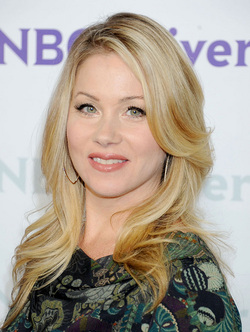 Christina Applegate (born November 25, 1971) is an American actress. She is best known for playing Kelly Bundy on the FOX sitcom Married... with Children. Since then, she has established a film and television career, winning a Primetime Emmy and earning Tony and Golden Globe nominations. She has had major roles in several films including Don't Tell Mom the Babysitter's Dead, The Big Hit, The Sweetest Thing, Anchorman, Farce of the Penguins, Alvin and the Chipmunks: The Squeakquel, Going The Distance and Hall Pass. She has also starred in numerous Broadway theatre productions such as the 2005 revival of the musical Sweet Charity. As of May 2011, she is set to star in NBC's comedy, Up All Night. On August 3, 2008, People magazine reported that Applegate had been diagnosed with breast cancer. This was confirmed by her representative who said in a statement, "Christina Applegate was diagnosed with an early stage of breast cancer. Benefiting from early detection through a doctor-ordered MRI, the cancer is not life-threatening. Christina is following the recommended treatment of her doctors and will have a full recovery. No further statement will be issued at this time." On August 19, 2008, it was announced that Applegate was cancer free after a double mastectomy, even though cancer was found in only one breast. She has an inherited genetic fault, a BRCA1 mutation, which often triggers breast cancer. Her mother, Nancy Priddy, is a breast cancer survivor. Applegate said when she first was diagnosed, "I was just shaking and then also immediately, I had to go into 'take-care-of-business-mode' which included a change to a more healthy diet." Applegate has recently been a frequent guest judge on FOX's So You Think You Can Dance.

Christina (paired with Jonathan Platero) made 5th place in Season 6 when she was sent home instead of former US President Bill Clinton. Christina joins Tom Hanks as All-Star co-host because both Kendall Schmidt and Brittany Brannon are temporarily stepping away from their hosting duties to participate in different capacities.