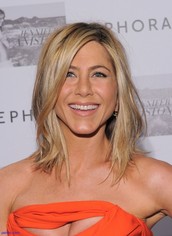 Jennifer Joanna Aniston (Anastassakis) (born February 11, 1969) is an American actress, film director, and producer. Aniston gained worldwide recognition in the 1990s for portraying Rachel Green on the television sitcom Friends, a role which earned her an Emmy Award, a Golden Globe Award, and a Screen Actors Guild Award. Aniston has also enjoyed a successful Hollywood film career. She gained critical acclaim for her performances in the independent films She's the One (1996), Office Space (1999), The Good Girl (2002) and Friends with Money (2006). She has had her greatest commercial successes with the films Bruce Almighty (2003), The Break-Up (2006), Marley & Me (2008), Just Go with It (2011) and Horrible Bosses (2011). Aniston received a star on the Hollywood Walk of Fame on February 22, 2012. She and boyfriend Justin Theroux became engaged in August 2012. 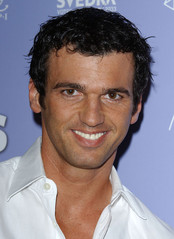 Driton Dovolani (born July 17, 1973) is an Albanian American professional ballroom dancer, instructor and judge based in New York City. He is known for his involvement in the American version of Dancing with the Stars on ABC. Dovolani also portrayed a Latin bad boy in the hit film Shall We Dance? and spent time coaching actress Jennifer Lopez. When not dancing, he enjoys spending time at home with his wife, daughters and son. 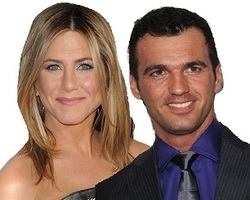