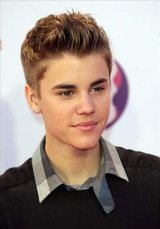 Justin Drew Bieber (born March 1, 1994) is a Canadian singer-songwriter, musician, producer, entrepreneur, investor, and actor. Bieber was discovered in 2008 by American talent manager Scooter Braun, who came across Bieber's videos on YouTube and later became his manager. Braun arranged for him to meet with entertainer Usher Raymond in Atlanta, Georgia, and Bieber was soon signed to Raymond Braun Media Group (RBMG), and then to an Island Records recording contract offered by record executive L.A. Reid. His debut extended play, the seven-track My World, was released in November 2009, and was soon certified platinum in the United States. He became the first artist to have seven songs from a debut record to chart on the Billboard Hot 100. Bieber's first full-length studio album, My World 2.0, was released in March 2010. It debuted at or near number-one in several countries and was certified platinum in the United States. It was preceded by the worldwide top-ten single, "Baby". He followed up the release of his debut album with his first headlining tour, the My World Tour, the remix albums My Worlds Acoustic and Never Say Never – The Remixes, and the 3D biopic-concert film Justin Bieber: Never Say Never, which nearly tied the record for the biggest opening-weekend gross for a concert-film. Bieber released his second studio album, Under the Mistletoe, in November 2011, when it debuted at number-one on the Billboard 200. Bieber released his third studio album, Believe, in June 2012, it became his fourth chart topper in the United States, debuting at number-one on the Billboard 200. Intent on developing a more mature sound, the album is regarded as a musical departure from his previous teen pop sound. Bieber has received numerous awards, including Artist of the Year at the 2010 American Music Awards, and was nominated for such accolades as Best New Artist and Best Pop Vocal Album at the 53rd Grammy Awards. With a global fan base, termed as "Beliebers", and over 27 million followers on Twitter, he was named by Forbes Magazine in 2012 as the third most powerful celebrity in the world. He had earned an estimated US$55 million in the previous 12 months. As of May 2012, Bieber has sold 15 million albums. Justin Bieber along with Taylor Swift won top honours at the Teen Choice Awards on July 22, 2012. He has a net worth of US$108 million as of August 2012. 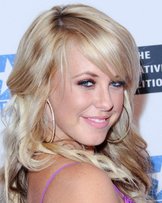 Chelsie Kay Hightower (born July 21, 1989) is a Latin ballroom dancer, who is best known for being a regular dance partner, trainer, and choreographer on the ABC competition show Dancing with the Stars. At 18, she made her television debut on So You Think You Can Dance. She was eliminated from the U.S. reality TV show on July 31, 2008 along with original dance partner Mark Kanemura. Hightower made an appearance in Sports Illustrated Swimsuit Winter 2010 edition (pages 152 and 153) along with three other couples from Dancing with the Stars. On July 8, 2010, Chelsie received an Emmy nomination for the "Paso Doble/Malagueña" dance that she and Derek Hough performed and co-choreographed for Dancing with the Stars Season 10. Hightower has performed with singer/songwriter Jewel (Ty Murray's wife) in concert on Jewel's hit "Hands". 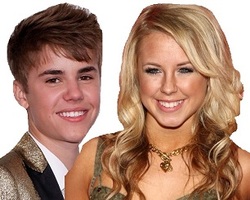